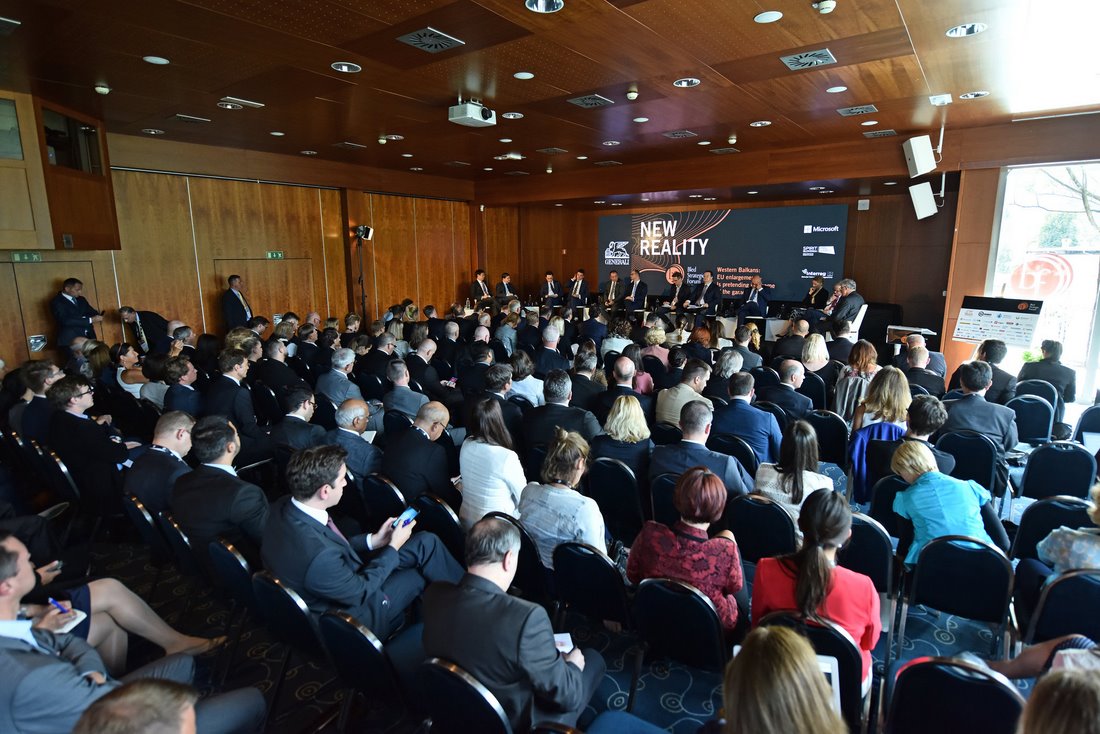 A high-profile panel debate on the Western Balkans wrapped up the two-day Bled Strategic Forum (BSF), with the participants agreeing that the EU accession prospect has a transformative effect on the countries in the region, but also that the accession is a two-way process that requires effort from both sides.

Entitled Western Balkans: EU Enlargement – Is Pretending the Name of the Game?, the panel featured ministers or deputy ministers of foreign affairs of seven Western Balkan countries as well as representatives of the European Commission, the European External Action Service, the EBRD and the US State Department.

H.E. Mr Ditmir Bushati, Minister of Foreign Affairs of the Republic of Albania, said that he believed that the EU had a transformative effect in the region, as the “atmosphere is more peaceful than ten years ago”.

“It goes without saying that all countries have made effort towards the accession process”, he said, but admitted that the process was not the “most popular game in the town” any more, and that “you do not win or lose elections on the European ticket”.

H.E. Mr Igor Crnadak, Minister of Foreign Affairs of Bosnia and Herzegovina, said that his country needed very precise and concrete messages from European partners. “We need more predictability in the process, but we also must not be avoiding our duties and obligations”.

Crnadak warned that a high level of support of EU accession process in the country should not be taken for granted. “If people start to perceive this process as something eternal, they will start looking for alternatives, and this is something we want to avoid.”

H.E. Mr Ivica Dačić, First Deputy Prime Minister and Minister of Foreign Affairs of the Republic of Serbia, is pessimistic about Serbia’s prospects to join the EU, as “we are being so late that we are getting an impression we will never enter the European Union”.

Mr Dačić has the feeling that the European Union as an organisation “does not have a fair attitude towards Western Balkan countries”. “Either we will join the EU or the EU will join us. I hope that we will enter before the EU falls apart.”

H.E. Prof. Dr Srdjan Darmanović, Minister of Foreign Affairs of Montenegro, said that his country believes in the EU and that it was working hard to become a member. Montenegro has hope in the EU unity and the European idea, according to him.

“Our region has always needed an additional source of stability, the EU is that source”, he said, adding that the strong presence of the United States and regional cooperation was also needed.

H.E. Mr Nikola Dimitrov, Minister of Foreign Affairs of the Republic of Macedonia, spoke about Macedonia as an example of “how not to do enlargement”, as the transformative effect had turned the country upside down.

“Macedonia is an example of what happens when there is no perspective and when progress reports are softened up, when a country stops taking reforms seriously,” he said, adding that the country was nevertheless showing political will to make changes.

Mr Valon Murtezaj, Deputy Minister of Foreign Affairs of Kosovo, agreed that the EU enlargement process is transformative. “The process is quite long, and it is sometimes very complex, but it is very doable, and it is a motivation for all our governments”.

What Kosovo needs to do internally is to identify the problems and tackle them individually, speed up development and reforms and establish regional cooperation. “We are slow but on the right path”.

Looking from the perspective of a Western Balkan country that has already joined the EU, H.E. Ms Marija Pejčinović Burić, Deputy Prime Minister and Minister of Foreign and European Affairs of the Republic of Croatia, said that the process should be transformative, otherwise something was wrong.

Pejčinović Burić added that the EU should establish a system of monitoring and benchmarking for future rounds of enlargement, noting that some rounds of enlargement in the past did not need to be transformative because the countries in question had already been full democracies and market economies.

Mr Hoyt Brian Yee, Deputy Assistant Secretary of the Bureau of European and Eurasian Affairs at the US State Department, said that it would be an exaggeration to say that the process had been transformative for the Western Balkans.

According to him, the joke that the EU pretends to offer membership and Western Balkan countries pretend to make reforms still holds true. The region “only accepts change when faced with necessity and only recognise necessity when amidst of a crisis”.

Mr Thomas Mayr-Harting, Managing Director for Europe and Central Asia at the European External Action Service, said that the EU foreign policy chief Federica Mogherini had been very clear that the future of the region lied in the EU.

“We reiterated months ago that the process has been transformative”, he said, adding that there had been a number of “remarkable successes” in the region recently, including a “new beginning in Skopje” and the justice reform in Albania.

Mr Walter Deffaa, European Commissioner Cretu’s special adviser, said that “one should not underestimate the transformative power of cooperation between the Western Balkans and EU that is happening at the moment. This are kind of mini laps of an integration. And then there are much higher profile, politically, the macroregional strategies. We have four strategies there, and two important macroregional strategies that are of importance for the Western Balkans counties, the Danube and Adriatic-Ionian strategy. And here again, having it for the first time in this kind of set up, that for high profile initiatives, endorsed by the European Council, the Western Balkan participating countries – they are there on an equal footing. They are shaping and deciding on development issues for the Danube and for the Adriatic Ionian region. Serbia, for instance, is very active now, when it comes to the Danube. These are concrete examples of what can happen in very concrete terms in the area of regional cooperation.”

Mr Pierre Heilbronn, Vice President, Policy and Partnerships at the EBRD, noted that all stakeholders needed to be included in the process, pointing to the role of civil society and entrepreneurs as something that has the capacity to transform the society.