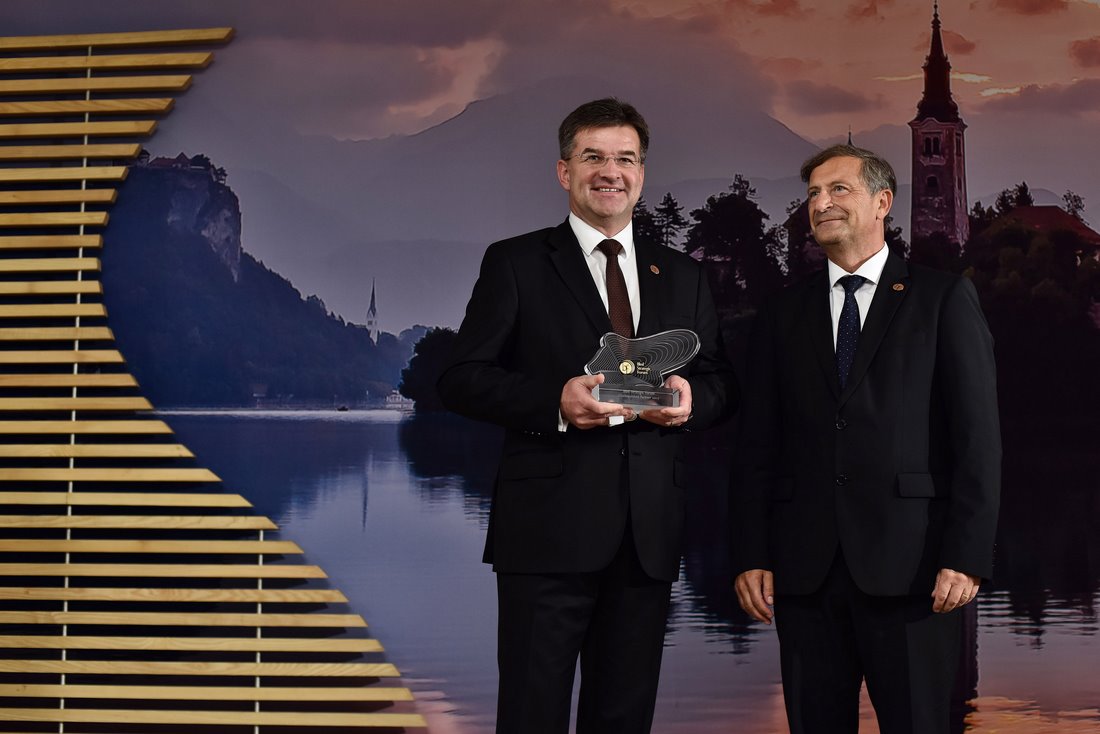 H.E. Mr Miroslav Lajčák, Minister of Foreign and European Affairs of the Slovak Republic and President-elect for the 72nd Session of the UN General Assembly, received a special accolade on the first day of the Bled Strategic Forum (BSF). He was named a BSF Distinguished Partner for his continued support of the purposes and principles of the forum.

Mr Lajčák actively promoted the BSF’s mission and supported its activities and progressive ideas about advancing strategic dialogue under the auspices of the BSF since 2006, when the first forum took place. The award is an acknowledgement of “his contribution and commitment to promoting, fostering and sustaining effective strategic
dialogue and raising awareness of the importance of the Bled Strategic Forum’s aims, objectives and priorities,” the Foreign Ministry said.

Peter Grk, the Secretary General of the BSF, noted that Mr Lajčák’s participation in the forum had become a tradition, having attended as a high representative for Bosnia and Herzegovina, a member of the government and now as the president-elect of the UN General Assembly. “We highly appreciate your contribution to all the debates you have
participated in, and we are very grateful for promoting and enhancing the visibility of the forum, its aims, objectives and priorities,” he said.

Mr Lajčák said he was very honoured to receive the award. “The truth is that I love it here. For me, Bled is the symbol of the end of the summer break and the beginning of the diplomatic season,” he said.

Turning to the forum itself, he said he loved the fact that the BSF had retained its character, remaining small enough for quality discussions and for officials to listen to one another. “This is very special about Bled, please keep it in the years to come.”

Mr Lajčák said he also loved Bled as the location of the forum and would love to come again. “I want to thank the founding fathers, those who came up with the idea to organise this conference at this time and this place. It really brings us together. It gives us an opportunity to talk to each other and listen to each other. I hope there will be many more successful Bled conferences.”