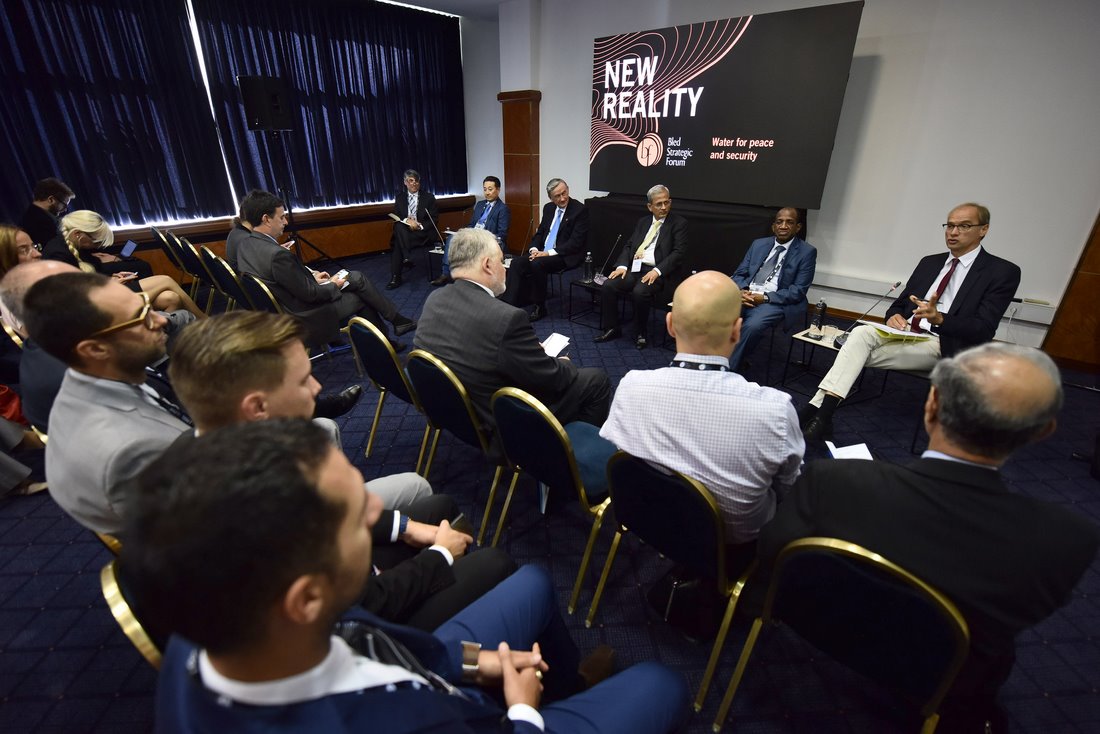 The Water for Peace and Security panel looked at the growing international recognition of the water-peace nexus in a time when water is becoming scarce. Danilo Türk, Slovenia’s Former President and currently chairman of the global high level panel on water and peace, pointed to the rapid deterioration of respect for international humanitarian law in conflicts. “Increasingly often water resources and water infrastructure are being attacked… and water is being used as a weapon of war”.

Water sources should be outside of military objectives, he stressed, noting this is a new concern that highlighted the water-peace nexus. The second reason is that water cooperation is increasingly recognised as an aspect of international cooperation, one that stabilises peace and is becoming more and more necessary.

Measures proposed by the former Slovenian president and to be presented in Geneva shortly include new water diplomacy efforts, innovative measures for financing, and all-around strengthening of cross-border water cooperation.

Switzerland has been one of the main countries promoting water diplomacy. Pio Wennubst, Assistant Director General and Head of the Global Cooperation Department at Swiss Agency for Development and Cooperation, said that “we learned many years ago that the only way to build stable societies and nations is by working on what unites us” and not on what divides us. Water can be both, so the issue of shared water was put high on the agenda. He stressed the need to move beyond words and execute financing, to include other actors than only political leaders, including the corporate sector.

While Wennubst also highlighted the financial value of a peaceful agreement in water disputes, an example of best practice, provided by Western Africa, was presented by Kabine Komara, Former Prime Minister and International Consultant at Invesco, Guinea.He pointed out that after gaining independence, countries in the region realised they needed to cooperate. Senegal, Mali, Mauritania Guinea commonly own the water assets.

Efforts are also underway in Central Asia, with Kairat Sarybay, Ambassador Extraordinary and Plenipotentiary of the Republic of Kazakhstan to Slovenia in Vienna, Austria, explaining that Kazakhstan is very dependent on its neighbours water-wise. Progress is being made in terms of cross-border management efforts but Mr Sarybay highlighted the problem of upstream countries seeing water as a commodity much comparable to other resources. “If you are selling us oil, we are in a position to sell you water.” A consortium has been stabilised to bring different stakeholders, he explained, noting the political climate is also improving.

Aaron Wolf, Professor and Department Chair of Geosciences at Oregon State University, US, pointed out that the issue of water and security has become incredibly elevated in recent years. He indicated that historically, counties have resolved water-related conflicts with very stable agreements, with water being something countries can come together about when nothing else is possible. However, while states tend to work together, there is a lot of violence at sub-state level. According to him, the simplest solution at this level “as unsexy as it is, is poverty reduction, simply helping with infrastructure”.