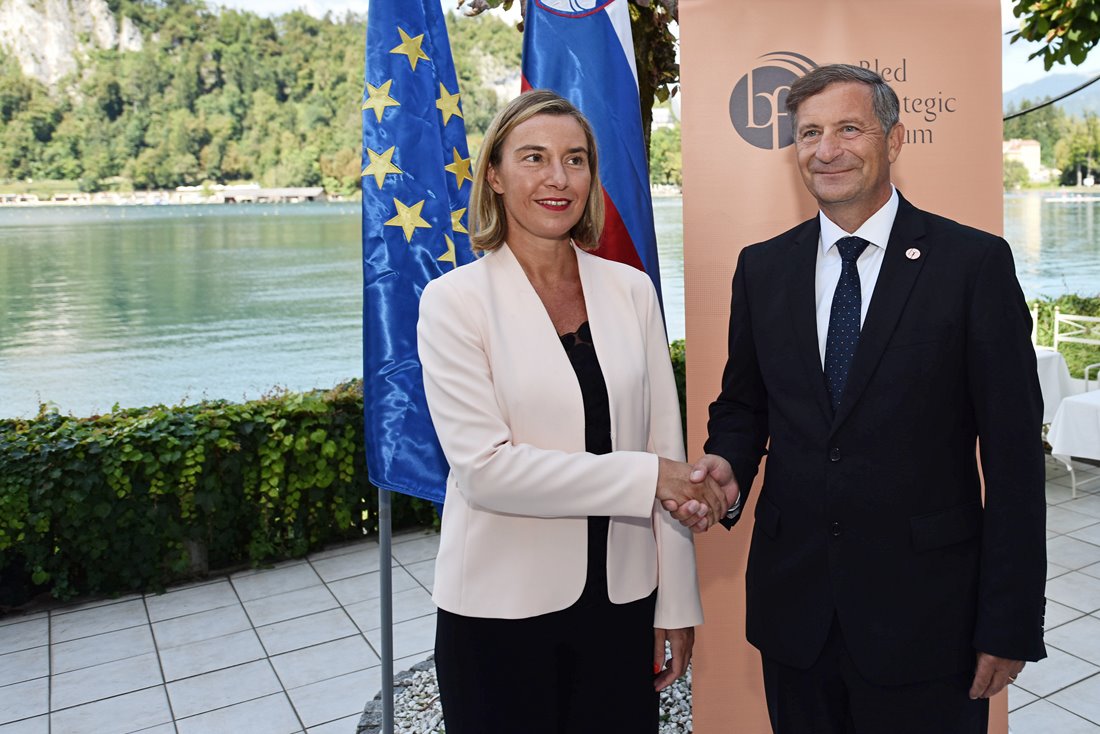 Federica Mogherini, the EU’s High Representative for Foreign Affairs and Security Policy, addressed the Bled Strategic Forum on Monday to promote a cooperational as opposed to confrontational approach to existing challenges, including in North Korea and the Western Balkans.
Reflecting on the main theme of the forum, Ms Mogherini agreed it was appropriate to speak of a “new reality”, but noted that many of the current challenges had already existed in the past. “We have lived globalisation for at least 20 years,” she said, arguing that what had changed were the reactions of governments and citizens.
Speaking about the fragility of governance and the unpredictability of institutional choices, Ms Mogherini said the EU “stands in this context as a strong, united, reliable and global partner” in the search of a rational, multilateral and cooperative way out of the many crises of today’s world.
She juxtaposed this cooperative attitude to a confrontational approach, to a “mindset based on transactions, on a zero-sum game, where my success requires someone else to fail”.
“It is clear where the EU stands. Not because we are naive, or because we don’t like power politics, we understand it… It is because we know what works better… We know that cooperative solutions are more solid and more resilient in times of crisis.”
She took as an example the situation in North Korea, a “major threat and provocation directed against the entire international community”, arguing that a Korean peninsula free of nuclear weapons was in the interest first of all of the Koreans but also of the entire world.
“We want a complete, verifiable and irreversible denuclearisation…The path undertaken by North Korea is dangerous, irresponsible and illegal,” Ms Mogherini said, wondering how to help de-escalate the tensions.
While urging determination, diplomacy and unity of the international community, she said the EU is ready to support new and tougher sanctions by the UN Security Council.
“This is the moment to put maximum pressure on North Korea, economic and diplomatic pressure,” Ms Mogherini said, while arguing that one can be strong and peaceful at the same time.
“There is no military solution to these tensions. Any attack could easily spiral into a large-scale conflict,” she said, adding this crisis could affect everyone. While announcing additional efforts in the outlined direction, Ms Mogherini turned to the Balkans, saying the cooperation principle also applied there.
“For me, it is only obvious that all the Balkans should and eventually will be part of the EU. This is the promise we made to each other more than 13 years ago.”
“I’ve made it my, even my personable goal, that by the end of the current European Commission mandate in two years, we will see practical and measurable progress for all of our six partners in the Western Balkans, progress that will make their path to the EU irreversible,” said Mogherini, who has had several bilateral meetings scheduled in Bled, including with Slovenian Foreign Minister Karl Erjavec.
Source: Slovenian Press Agency