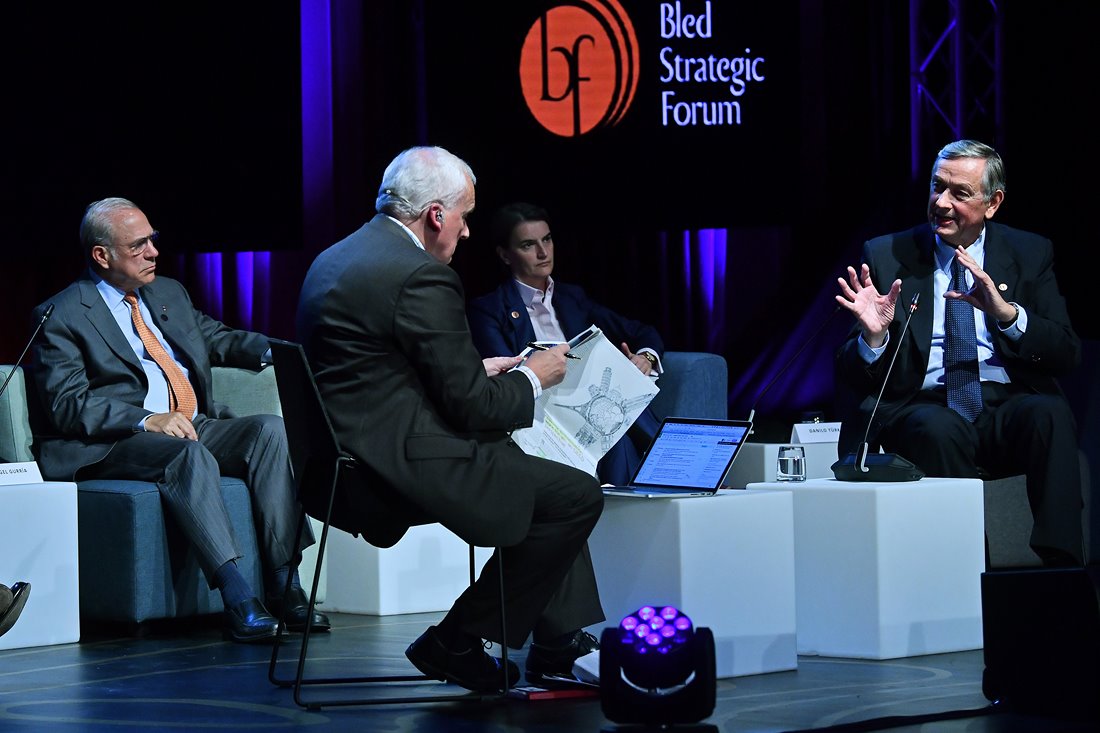 The Leaders’ Panel at the Bled Strategic Forum took a broad look at the technology-driven change shaping present-day society. While the participants found some cause for concern, they also exuded optimism, provided governments and societies succeed in leveraging the positive aspects of technology to adjust to the changing environment.

Mr Frans Timmermans, First Vice-President of the European Commission, started out by saying there was cause for optimism in the EU. Firstly, elections in several key countries did not go the way people feared; secondly, Brexit had a sobering effect; thirdly, the American election had a sobering effect on Europe – and all this has happened against the backdrop of an economic recovery.

However, he cautioned that many of the reasons for insecurity have not disappeared yet, and many extreme forces did not win elections but still did very well, which means there is still a long way to go. “It is important that people saw Europe is not unbreakable, perhaps this is a wake-up call that people needed,” he said.

Mr Angel Gurría, Secretary-General of the Organisation for Economic Co-operation and Development (OECD), focused on the state of the economy and globalization.

He stressed that despite economic growth being more sluggish than before the crisis, governments should not just focus on productivity and growth – but neither should they focus only on the people excluded from the benefits of growth. “We have to focus on the nexus of all this,” he said.

Mr Gurría also called for good public policies. He said globalization was misunderstood, as it did not exist in isolation, it existed as a set of policies. The job of policy-makers is to practice good policies, to “do policy right”.

H.E. Ms Ana Brnabić, Prime Minister of the Republic of Serbia, talked about Serbia’s place in the world after being asked by the moderator, Mr Nik Gowing, whether Serbia was still truly committed to the EU or rather drifting more towards Russia.

Ms Brnabić said she “completely disagreed” with the assessment of the drift towards Russia, noting that Serbia was showing strategic commitment to the EU and investing a lot of time, effort and political power into regional stability.

“The dialogue is there and it is stronger than ever in the region, which will also help economic development,” she said. This would hopefully give the EU the signal that Serbia is really serious about integration, she stressed.

She said Serbia’s strategic focus was on the EU, but it was necessary to acknowledge that Serbia had very strong ties with Russia underpinned by religion, tradition and free trade, and these needed to be valued and respected.

Dr Danilo Türk, Former President of the Republic of Slovenia, meanwhile contested the notion that profound chance was something new, noting that “we’re always living in a time of change”, though the world may be experiencing more profound technological change at the moment.

Dr Türk argued in favour of a new definition of solidarity in the EU; if this new definition continues to elude elites, the EU’s legitimacy will suffer.

The panel dedicated a lot of time to debating youths, specifically how they can be activated and engaged in policy-making, and how to create jobs.

Mr Timmermans suggested the idea of convergence – of incomes and living standards – needed to be revived. The failure of convergence over the past 15 years has “challenged social contracts in every country”, he said.

Mr Gurria stressed that the perception of wealth not being equally shared was not just a perception but reality. Those left out are hitting back by voting against whichever government is in power, or even worse, completely staying out of the democratic process. The message to leaders should be mindful of the nexus of productivity, growth and inclusiveness.

Dr Türk said the young generation would have to figure out their own forms of political participation, which is required since the older generation is not capable of producing the needed change alone.

Mr Gurria meanwhile pushed back at the very notion of generational gaps, saying that it was unrealistic to talk about generations. “Values are universal, regardless of generation,” he said, noting that leadership was not the question of age, it was about vibrancy, courage and conviction.

Asked how youths could enter the decision-making process, Ms Brnabić noted that this was a difficult question. She said that before social networks there were organisations you would join in which one made one’s views known. Now on social networks there is a lot of venting, and people think they have been heard – but they have not.

Mr Gurría urged youths to not stay out of the process, instead they should join the process. “To achieve change, don’t stay out, go there, run for parliament, run for local office.”