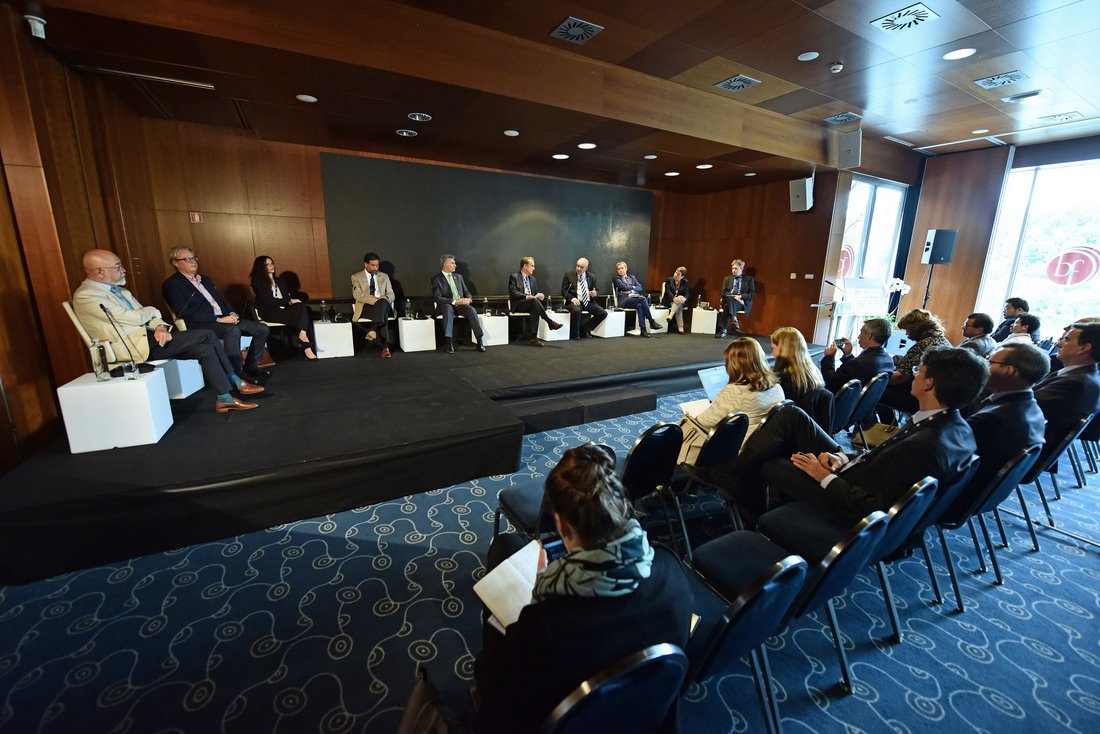 Participants of a panel debate on the Southern Mediterranean at the Bled Strategic Forum (BSF) agreed that the EU needed to tackle the challenges and threats coming from the region as a whole while paying attention to the specifics of the individual parts of the region.

H.E. Mr Fathallah Sijilmassi, Secretary General of the Union for the Mediterranean, said that “we collectively are facing these challenges, risks and threats”, which have to be dealt seriously.

He stressed that when facing terrorism, radicalism and illegal migration, “we stand on the same side – there is no north and south side of the Mediterranean”, adding that “we have to enhance our cooperation against these threats”.

Mr Sijilmassi believes that one of the solutions is building on the assets represented by the young people, academics and private sector organisations. The Union for the Mediterranean is taking a pragmatic approach in building on these assets, according to him.

Representing a “country in the middle of the Mediterranean”, H.E. Mr Carmelo Abela, Minister of Foreign Affairs and Trade Promotion of the Republic of Malta, said that the effects of what was happening in the Mediterranean were having an effect on a wider region.

While noting that development is the key, Mr Abela said that “we have to invest more in Africa” and pay attention to countries in the region where things may escalate.

“Challenges are quite a few, but we should be in this together. It is an issue for all of us to tackle, we are far better together rather than divided”, he concluded.

Ms Sarah Rizk, Counsel at Amereller, Germany, discussed the role of civil society in Egypt, saying that it was still able to contribute to changes that lead to building stable social and political order.

According to her, economic stability is the actual goal, and civil society is indispensable for this, as citizens are adopting and being committed to the values of democracy. Civil society mediates between citizens and the government.

Mr Terens Spenser Nikolaos Quick, Deputy Minister of Foreign Affairs of the Hellenic Republic, said that he had to start with Egypt, noting that “it all started with the Arab Spring”, which according to him “failed dramatically”.

He said that the biggest problem in the area was illegal migration and refugees, with Italy and Greece and probably Malta standing against almost all other European countries which are “raising fences” instead of “building bridges” like Canada.

“But hope dies last and I can assure you that we are trying to make the Mediterranean area an area of stability” by using youth, education, women empowerment and tourism as elements for making the area peaceful, he added.

Prof. Dr Masanori Naito, Dean of the Graduate School of Global Studies, Doshisha University, Japan, meanwhile discussed Syria as another crisis area, saying that the government state system was the only solution.

“I don’t want to see any more borders in the Middle East, if another border is created, this means that this disastrous conflict will come again,” he said and noted that the Kurdish forces could expect their independence or an autonomous territory.

Mr Michael Martens, South East Europe/Turkey Correspondent at Frankfurter Allgemeine Zeitung, Germany, added that Turkey could not be avoided in this discussion, noting that the EU-Turkey relations were at all-time low.

He warned about “the gradual militarisation of the Turkish foreign policy“ and a shift to a hard approach from the soft approach for which Turkey has been very often been praised, especially in the Balkans.

Dr Hanan Ashrawi, PLO Executive Committee Member and PLC Member, Palestine, warned against Palestine disappearing from the global agenda. It is an “elephant in the room” and the international community cannot ignore the injustices done to Palestinians, she added.

The issues that has “destabilised the entire region” must be resolved on the basis of international law and justice, Ms Ashrawi said, adding that anything that happened in the Middle East was going to reflect on Europe and beyond.

Senator Benedetto Della Vedova, Under-Secretary of State at the Ministry of Foreign Affairs of the Italian Republic, argued that “we need a political commitment to have a single European policy on migrations”.

Mr Della Vedova stressed that the Dublin rules had to be changed because they were set up for different issues, not for this kind of migrant flows, and that the EU needed a single policy in Africa to be more effective in tackling the challenges.

Prof. Dr Marko Pavliha, Vice Dean and Head of the Law Department at the Faculty of Maritime Studies and Transportation, University of Ljubljana, Slovenia, pointed to the role of the Euro-Mediterranean University (EMUNI) and the International Maritime Law Institute (IMLI).

One of the possible answers is holistic, compassionate, intercultural, human-rights orientated education, knowledge and ethics empowerment, he said, as “we also need to educate our hearts and not only our brains”.