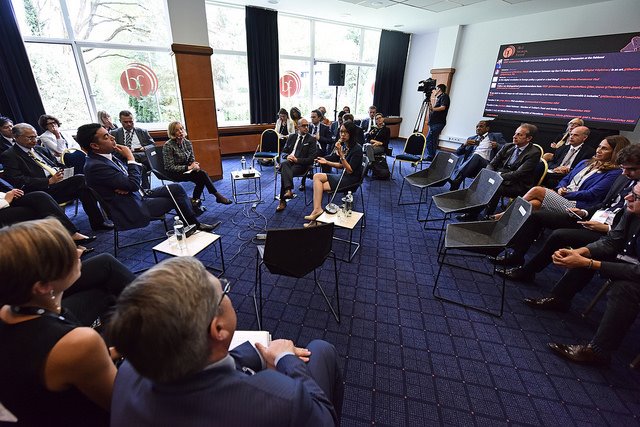 Digital media have revolutionised diplomacy, agreed participants of a panel on digital diplomacy panel at the Bled Strategic Forum (BSF) in Bled on Tuesday. Although requiring quite a lot of skill and sensitivity, the new type of communication also brings many benefits.

H.E. Mr Nikola Dimitrov, Minister of Foreign Affairs of the Republic of Macedonia, an active user of Twitter, believes digital media did not mean an end to diplomacy, but only changed the method of communicating.

He thinks it is impossible for diplomats to ignore this new reality. According to him, diplomats must be genuine and honest in their statements on the social media, but also mindful of their role as representatives of their country. “I think that’s our challenge.”

Ms Eirliani Abdul Rahman, Member of Twitter’s Trust and Safety Council, Singapore, explained that Twitter’s Trust and Safety Council often had problems when deciding on the removal of inappropriate tweets, because people’s opinions on what is acceptable and what is not often vary significantly. But she believes that any negative comments targeting a specific person or a group should be considered unacceptable, especially if they are posted by public officials.

Mr Ilan Manor, PhD candidate at the University of Oxford, UK, pointed to collecting user data by Facebook and Google, saying that this practice opened a wide range of questions. Should countries be concerned that so much data on their citizens is accumulated by the social media, he wondered, adding that another question was whom this data belongs to. If data is the new oil, this calls for restrictions in this field, he argued.

He believes the social media have changed diplomacy in three ways. Firstly, they changed the speed of diplomacy, which frequently complicates the situation. Secondly, they increased transparency and thirdly, they created a “loud and volatile public”, which also complicates diplomatic efforts. People are increasingly influencing politicians through social media, he suggested.

Mr Dimitrov sees this as a positive change. “This makes democracy more legitimate,” he said, adding that politicians were no longer tested every four years, but on a daily basis.

Asked whether a tweet can start a war, Mr Manor said that he believed social media “diminish the chances for war”. If people’s attention is dispersed, they will not be able to focus on one issue. What is news one day, may not matter any more the next day, so diplomats and politicians have time to find solutions.

Touching on the issue of hate speech on social media, Mr Manor said that only one type of hate speech was relevant in political discourse and that was the one that is aimed at radicalising people. Another problem is that by keeping hate speech away from social media, one can create the impression that people with negative or extremist opinions do not exist, but they do and their opinions will surface sooner or later, he warned.

Mr Dimitrov believes diplomacy should not be about thinking twice before saying nothing. “We have a responsibility … to be there and have a say,” he said about diplomats’ presence on social media. But he noted that silent diplomacy could still be conducted as well.

Echoing this, Ms Rahman said social media should be one of the tools of diplomats. But one must bear in mind the specifics of every individual country, she warned.

A few years ago, digital diplomacy was about opening as many accounts on different social media as possible, but now it has moved to the second stage, Mr Manor said. Now, the strategic goal of this type of communication is being determined and the type of media carefully picked with respect to countries’ specifics.

Looking into the future, Mr Manor said he expected ministries to accumulate big data to be able to foresee crises or help their citizens. He also expects the increased use of artificial intelligence and the use of virtual reality, especially to promote the national image for tourism purposes.