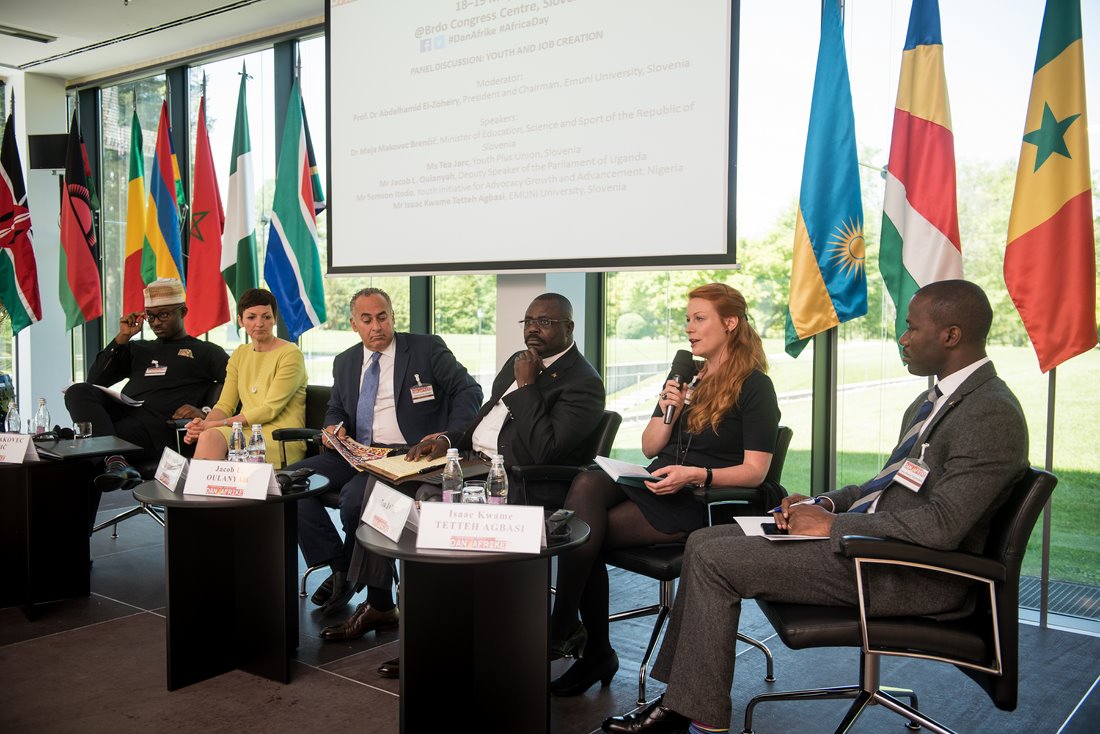 The two-day Africa Day conference was launched this morning at Brdo. The welcoming addresses by Minister Erjavec and Ajay K. Bramdeo, Permanent Representative of the African Union to the European Union and the ACP, were followed by three thematic panels, ‘Youth and job creation,’ ‘Economic and cultural networking in Africa,’ and ‘EU-Africa: Common challenges and a shared vision,’ where the panellists sought answers to some of the major challenges facing Africa and Europe.

The first panel was dedicated to empowering young people on the African continent and creating jobs. Regardless of the outstanding economic and social progress in African countries in the new millennium, we cannot ignore the high unemployment numbers and the exclusion of certain groups of people, with youth being the most vulnerable category, the panellists agreed. Many well-educated individuals are subjected to under-employment or other precarious forms of work, while the majority of the labour force work in low-productivity sectors. The panellists shared the opinion that the structure of modern labour markets, rural development and urbanisation investments should be given more prominence, along with investments in agriculture, which remains a pillar of the African economy. Rising youth unemployment, a lack of prospects and the inequalities between different regions lead to migration and may lead to radicalisation among young people, which raises particular concern in the light of today’s global challenges. The panellists noted the interrelation between prosperity and security on the one hand and productivity on the other; however, the latter can be achieved only by creating a supportive environment conducive to structural changes and strengthened democratic institutions in which the voice of youth will be heard.

The general view expressed by the second panel on economic integration between African states and regions was that policies, rules and standards must be harmonised in order for integration to be effective. In addition, transport, telecommunication and other infrastructure must be improved to enable closer integration and bolster trade on the continent. The panellists also pointed out the role of African expatriates around the world, who significantly contribute to the development of their native countries and act as a bridge between different countries and regions.

The third panel addressed challenges faced by both Africa and Europe, seeking to find a common vision for their future partnership. True and frank cooperation and partnership between the two continents is of the essence and must become a priority of both partners, the panellists concluded, adding that many areas of cooperation could be further consolidated. With this in mind, the partnership should be reviewed in order to assess the effectiveness of tools and policies in achieving the main objective of African countries – to improve the standard of living of the general population. In this regard, Europe must stand by Africa in taking on its major challenges as it sees appropriate, while supporting its capacities. The panellists agreed on the need to invest in young people, in whom our future lies.

In his concluding remarks, the President of the National Assembly, Dr Milan Brglez, commended the fact that the Africa Day conference now has a permanent spot on the calendar and has in just a few years become a traditional gathering of Slovenian, African and European partners, and wished the participants further productive debates that would generate new partnerships and new ideas for deepening cooperation.