There lived an incredible group of individuals who wanted to make a difference in society. They answered the call from Ministry of Foreign Affairs of the Republic of Slovenia and one weekend they all gathered together for a magical event called ‘Youth Bled Strategic Forum’. They came from many faraway lands – Japan, Brazil, Egypt, Moldova, Montenegro, Australia, Serbia, EU countries and others, to attend this event held in the region of central Slovenia – green Ljubljana at ABC Accelerator. In fact, more than 30 creative minds, tech and social entrepreneurs and researchers gathered for 48 hours to collaborate to create stories and raise awareness on the pressing issues related to the nexus of economy, ecology and electronics in times of (dis)connected reality.

Concrete issues were tackled over the weekend. Groups were created with a mix of professions, including start-up CEOs, researchers, governmental officials, innovators, web designers, social and tech entrepreneurs. Led by a design-thinking coach these groups were tasked with creating a ‘tale for the ages’ regarding their chosen venture. For 48 hours, participants of the 7th Young BSF were networking and bonding, thinking outside the box and making magic. Participants really got to work on Saturday morning in an Opening Reflection with H.E. Dr Miro Cerar, Prime Minister of the Republic of Slovenia, that encouraged the participants not to forget the values behind any positive change in society and to be courageous, bold, innovative, open, but also to be tolerant and cooperate with each other.

Participants prepared a manifesto with 10 actionable policy recommendation for the changing world in three sessions on electronics, environment and economy that were initially presented to the Mayor of Ljubljana Mr Zoran Janković and subsequently at the Bled Strategic Forum. In addition to that, participants walked away knowing that they were helping to make the world a better place. Participants left the event inspired, buzzing and motivated. New partnerships were formed and friendships created. They travelled back to their faraway lands motivated and inspired…

1. Prepared for the Challenge 4.0: Each stakeholder – policy makers, implementers, educators, non-technological businesses, media, and users should be continuously educated to enable them to adequately participate rather than just observe Industry 4.0. Plans and resources should be made for relevant, efficient and timely training and learning by the best providers in education – public and/or private.

2. Technological Inclusiveness: While technological achievements are common and widely used in more developed and affluent parts of the world, it is not the case across the globe. To address the emergence of regional technological asymmetries and the distinctive form of inequality that it brings, we propose the establishment of a Universal Basic Technology System to act as a redistribution mechanism similar to that of the Universal Basic Income. The system should be financed by a combination of smart taxation and an incentive-focused tax relief policies, built around key stakeholders, both corporate and individual.

3. Problem-based Learning: For the humankind to remain and be a positive factor in the ever-more frantic societal change, we call for an Education Reform employing problem-based, life-long learning with an emphasis on character-building. Such reform would help raise responsible and proactive citizens, capable of critically assessing new issues and responding to them in a swift manner which remains inclusive and sustainable.

4. Universal Technological Ethical Code: We unanimously recognize the development of clearly defined ethical standards as one of the main challenges of our hyper-technologised and often borderless societies. To avoid the misuse of power around scientific breakthroughs, both on the part of states as well as non-state actors and individuals, a clear set of rules and guidelines need to be established. They would direct all areas of human activity heavily impacted by digital and other newly emerging technologies.

5. Incentive-driven Agriculture Policies: Many traditional human activities are facing the challenge of an aging population and disappearing knowledge pools in certain industries. Agriculture, particularly at local level, is a pertinent case in mind. To motivate producers in the agricultural sector to continually educate themselves and strive for sustainable production, we suggest a revision of subsidy policies and smart incentive-oriented approaches that enable local production to better dovetail with the industrial food sector. Such approach would result in higher quality of products while also ensuring a more secure form of income and sustainability for producers at all levels.

6. Green Urban Planning: It is projected that by 2050, 70% of the world’s population will be urban. Cities, regardless of their size, should strive to increase and balance the size of their green areas. This can be achieved by traditional means, such as re-opening old and creating new parks in different forms, as well as using previously idle spaces, as is the case with rooftop gardens. This would provide a valuable example for city-dweller to also engage in responsible and sustainable production within the confines of their own homes and communities. Green urban planning should become an highly-ranked integral part of policy contemplations both at the state and municipal level, while also becoming a fulcrum of private undertakings.

7. Sustainable Consumption: It is important to stress that how we consume is just as important as how we produce. Since the bulk of the global consumption stress is rooted at the level of the individual consumer, the only way for us to lessen the ecological footprint of human consumption is to become more and better aware of the impact of our everyday activities. People should be encouraged to engage in moderate and ideally environmentally neutral consumption, something that can also be supported by innovation and awareness raising campaigns undertaken by both public and private actors, as well as on international level.

8. Increased Efficiency of Public Services: Today, large portions of the public sector seem to be trapped in a pre-digital era. This is perhaps most evident in the case of bureaucratic services, which many people consider to be the epitome of inefficiency and tediousness. It is even more remarkable when we consider the innovation and optimisation potential of modern technology on administrative processes and the fact that technology-based solutions are regularly adopted in the private sector to great avail. In addition to existing digital solutions, newly emerging technologies, such as virtual reality and blockchain should also be considered seriously and in a timely manner to enable e-governance systems to be fit to serve the needs of people in the 21st century.

9. Trust Building through Improving Transparency: Lack of trust both in public institutions and private organisations is undermining people’s ability to tackle contemporary challenges across the global policy spectrum effectively. As technology develops, this problem is likely to worsen, unless ethical standards are introduced along with scientific advancements. To this end, existing as well as emerging technologies should be taken up with the aim of improving the transparency of all societal and economic processes, through open data, big data and more. While process tractability is likely to be affected to an extent, particularly regarding privacy, we still regard these measures worthy of consideration given their trust-building potential.

10. Enhanced Cyber Security: In a world where not only virtual but also physical infrastructure is governed using digital systems, the enhancement of cyber resilience is paramount. To avoid intrusions and disruptions at an individual level as well as curtail systematic risk, a two-pronged approach is required. Firstly, we need to reinforce our technical capabilities by investing in nascent technologies, such as machine-learning and artificial intelligence, which will help us have the necessary level of control in an ever-more complex world. Secondly, restrictive standards should be put into place – they would clearly define which actions are permissible within the cyber realm and crucially how to deal with violations. Cyber security standards should be agreed at a global level and would need to be binding for all relevant stakeholders.

Support the Manifesto at: http://bit.ly/ybsf17manifesto 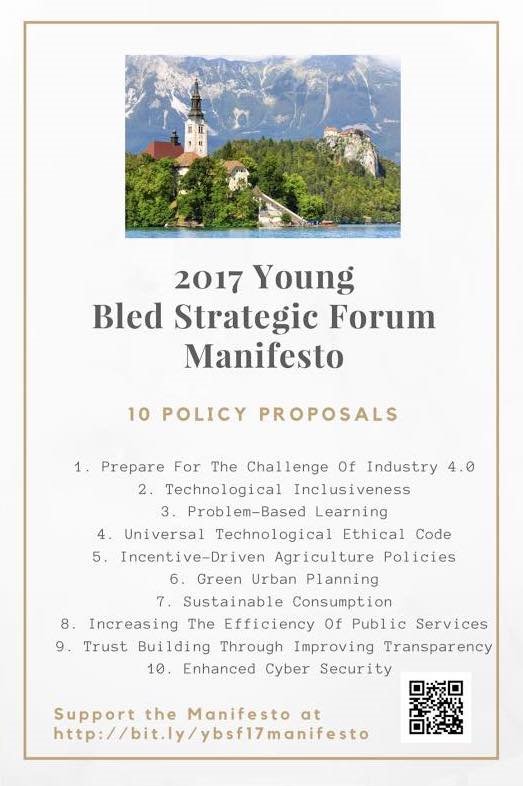